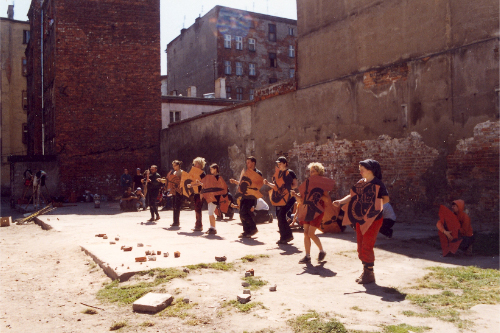 From the Archive of TEART Association – The Programme of Theatrical Actions

Before arriving in the US in 2001 from my native Poland, I was leading the theatrical Association TEART, where we produced and carried out a variety of theatrical projects. Below I am pasting the archival text written in 2000 which briefly summarizes the activities. Thank you to Michal Jezierski and MaryBall Opie for the translation.

There are some parallels between how TEART was developed and how 15 years later we are developing Dream Tale Puppets. In both cases a group of artists develops and creates unique theatrical projects, working at the same time on carving out its own place in society, gaining community support and recognition of the value of its work.

Of course, there are a lot of differences, but many creative approaches and methods that I developed with my actors and partners in Poland remain in my toolbox. Some of these methods and approaches we will be using and referring to in Dream Tale Puppets’ current production of “Alice’s Wonderlands”.

The Association was created in Wrocław in February 1995. It develops the activities of Jacek Zuzański’s earlier Theatrical Actions Group. In the actions of TEART, theatre constitutes the axle around which the active participation-oriented undertakings revolve. Some projects focused on studying the techniques of acting, are closed to the audiences and serve to develop the creative potential of the participants. Other projects aim at realising actions open to the public. Always–whether it is a small, short project for few people, or a long, big project combining the work of several workshop groups as well as the actors from TEART, musicians and co-operating guest artists– it is the meeting and what results from attentive being together and common creation that matter most.

After five years, we have noticed that three fields of activity of the artists associated with TEART have developed:

Theatrical workshops are addressed to people interested in getting to know and develop their creative potential, to those who are curious about the mysteries of the actor’s work, and to those who through theatrical experience want to familiarise themselves with the methods of developing their own personality, both its deeply hidden nature and its outlet for self-expression. They can be valuable for everybody to whom working with people and being creative within the group are important.

The training in elementary acting skills constitutes the foundation. It consists of exercises on expression and co-ordination of movement, rhythm and music-based exercises, as well as those aimed at getting to know the elements of acrobatics and pantomime. Some parts of the classes concentrate on voice exercises and the clarity of enunciation, on work with a text and a song; others teach attention, introduce the principles of work with a partner and the means of working within a group. They allow for exercising concentration skills, shape sensitivity and imagination, teach how to awake the creative processes of internal life, how to handle the form of action and how to trust one’s own nature.

Subsequent meetings combine training exercises with creative tasks. As the training progresses, work transforms into rehearsals that are completed by sessions shaping the skills needed for the realisation of projects, and is aimed at maintaining the correct dynamics of the group and creative processes.

We deal with the forms of theatre of physical expression built on excerpts from literature montaged into a collage. We work with poetry and prose, with forms based on the elements of song and music, with the convention of visual theatre, the use of masks and puppets as well as with the forms based on drama. We combine literary forms with music and fine art, narration with dialogue. We use both the methods of training the actors know from traditional education as well as those used by alternative theatres. We also benefit from our own techniques that we have worked out over the years. The workshops are carried out on a regular on-going basis or in projects of several days’ or weeks’ duration during which the participants and the workshop’s leaders prepare theatrical realisations usually presented to the public at the finale of the project.

With the cooperation of The International Youths Meeting Centre in Wrocław and similar centres in Oświecim and Krzyżowa, as well as with the foreign partners, we have organised workshops for international groups.

Young actors, teachers, students from Belarus, Lithuania, Germany, Poland, the United States and Ukraine participated in these undertakings. Some projects were closed to the audiences and creative processes aimed at the experience of the participants, others finished with theatrical presentations to the public.

The principle of dialogue and experience is the key for this methodology. The outcome does not consist in performing the dramatic text; it consists in the result of the creative processes. Usually the work is conducted in a few international groups. Each of the leaders within these groups employs a method of training and creation that is typical of his approach.

The actions prepared within the groups constitute the material for common creation. The spectacles are created from etudes, actors’ actions, improvisation, songs, dances, visual objects and puppet animations that were prepared within groups. Sometimes the workshop groups are supported by invited professional artists.

Tasks and exercises are carried out by the participants individually, in smaller or bigger teams and altogether, allowing everybody to find many ways of perceiving and experiencing oneself and others, promoting communication and creation through theatrical action.

Theatrical methods of work developing sensitivity, the ways of expressing oneself through word, sound, music, and movement as well as the subjects referring to essential spheres of values make this collective, deep experience possible. Training in acting as well as the theatrical creative process provides many opportunities for developing self-knowledge and self-awareness as well as getting to know partners, and the breaks between the classes allow for spending time together more informally as well as developing new friendships.

Difficult tasks are carried out together, requiring accepting acceptance of mutual differences. Showing the effects of the work to the public demonstrates the ability to communicate through various theatre techniques despite cultural differences and barriers of spoken language.

Since November 1996, TEART carries out the programme SPELLS at the Wroclaw neglected courtyards addressed to children living in their area.

Basically, this programme consists of cycles of actions of several days’ duration, each of which aims at getting to know a given environment through creative workshops with children, small visual arts activities and presentations that lead to the final outdoor spectacle combining prepared actions. Each cycle begins with meeting the children at the courtyards, schools or day-care centres and playing with them. During these meetings, the animators talk to children about theatre and invite them to participate in workshops.

Work is conducted within two or three days in two or three groups of ten to fifteen children. On the day preceding the presentation of outdoor actions on a given courtyard or in its vicinity, there is a parade in which children participate offering handouts and invitations.

This work aims at creating courtyard celebrations animated by theatrical actions. The tale brought to life and its language of metaphors meet with concrete reality, its dark and light aspects. Presentation of the spectacle constitutes the central event, in which the children take part along with the TEART’s actors and invited artists. Visual elements of the show are also prepared by the children.

Methodology principle in “Spells” consists in treating children as partners. The meeting of a group of grownups with children and their work on a common task together is essential.

In the year 2000, we started “Our Make-Believe Lands Programme”. It comprises four courtyards, takes place over a period of several weeks and includes the work of a team of actors-animators with children from courtyards.

The presupposed goal of this work will consist of the “Our Make-Believe Lands Festival,” which will be prepared by the children. 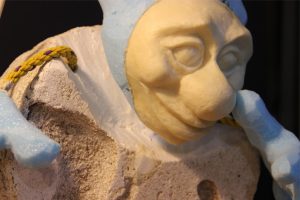 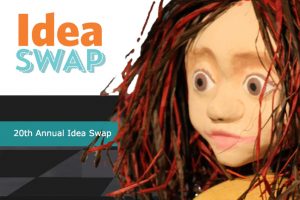 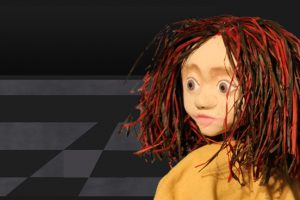